This year was my 3rd consecutive year of racing Chcukanut 50km in Bellingham, Washington. It is a great early season race, a test of fitness to see where I am at and with a super competitive field and lots of friends always taking part, so all in all one fun-filled trail race weekend.
The day before the race I was up early and flew with a friend from Calgary, landing into Vancouver by 9.30am. We spent the day catching up with friends over coffee and lunch and leisurely walking around the city until we met Susan and Mike who we car pooled with down to Bellingham. Although we could have driven down the morning of the race it was nice not to worry about border line ups and getting up quite so early on race morning, plus there were 10 of us crashing at a friends lake side second home just 15minutes from the race start which made for a social weekend.
I had had a cold in the 10 days or so before the race and had been getting over the worse of it before the flight to Vancouver. On the flight my ears were popping all over the place and by the middle of the day they were getting worse; I couldn't un-pop them, I was getting pretty deaf in one ear and it was turning into serious ear ache, hmm - not what I had hoped for and if it carried on this way I was worried it would affect my balance when running, aside from the fact that I was begining to feel a little spaced out. So Jason and I stopped in at a pharmacy and I got dosed up, something I usuall prefer not to do but within half an hour I was beginning to feel a little better so I was glad that I did.
For pre-race dinner we all hit the grocery store deli and got stocked up, it's a great way for everyone to get something they want pre-race and nice and quick and easy rather than eating out. By just after 10 we were in bed with multiple alarms set for 6am.
Getting to the start line about an hour before the race was ideal; time to collect our bibs, hit the washroom, say hello to lots of familiar faces and do general last minute prep. Last year I came 2nd at Chuckanut by 13 seconds, I knew Susannah Beck was not racing this year but even so there would be plenty of competition - namely Darcy Africa and Jenn Shelton. Of course Darcy and Jenn are names I have heard off for years but I had never raced either of them and to be honest I knew little of their racing resumes. No matter, I always believe you just have to run your own race and whilst be aware of the competition not let it influence the way you race too much. 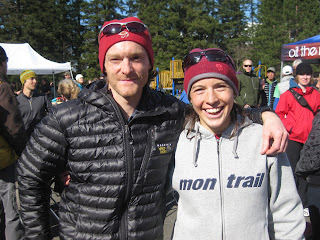 Montraileeees: with Geoff Roes
As RD Krissy Moehl coutned down to the start we were off behind a lead pack of 20 or so men who were pretty much a who's who of North American ultra running...Geoff Roes, Scott Jurek, Erik Skaggs, Tim Olson, Joe Grant, Aaron Heidt, Yassine Diboun, Adam Campbell ... I could go on, but you get the picture ... and I got the idea that us ladies should hold back of these guys! Immediately Jenn, Darcy and I were running together and introducing ourselves to each other. First we were in a little pack and then we were 3 abreast, chatting along and I was enjoying sharing the trail with them. 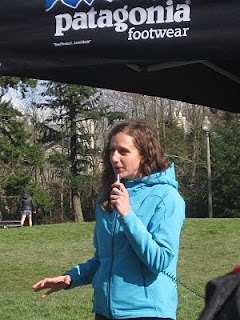 RD & amazing ultra runner; Krissy Moehl
Chuckanut starts and ends with 10kms on the flat, non-technical interurban trail. As we drew into the first station at 10km I consciously decided to carry on right through. I had my Nathan pack and shot bloks so didn't intend on using the aid stations for anything more than some coke and chips in the later stages. As I moved through I got a little ahead of Darcy and Jenn, and hoped that I could gain a lead; with hills not being my strong point I didn't really want to be running side by side them and feeling pressured on the climbs. I moved up the inclines and could still see Darcy behind me. A few men were in eye sight ahead and they carried on running as I moved to a powerhike. This didn't concern me too much - I powerhike more readily than lots of runners and I'm pretty fast at it, plus I could feel the effects of my cold on my breathing and just couldn't run some of the climbs. As the climbs progressed I really felt I should be running more than I was and was conscious that Darcy and Jenn were likely still hot on my heels, so I struggled on up, ran as much as I could and I realised that I was going to have to use the downhills and the flats if I was to maintain a lead.
I came blasting down into an aid station just before a sustained climb up a fire road and to my pleasant suprise had caught Topher (CEO, Mountain Hardwear) and Scott Jurek. Again, I didn't stop at the station but moved onto the fire road, knowing this was going to be tough. I tried to keep up with Topher as Scott pulled a little ahead but mixed running and powerhiking and slipped slowly back. I stole a couple of glaces back, convinced that Darcy and/ or Jenn must be gaining on me - but they weren't there. As I approached the top of the climb there was a scattering of fresh snow on the sides of the trails and a wind blew through but I was still glad that I had ditched my jacket earlier as the sun was coming out too.
With the fire road done there is a mix up ups and down and more technical trail. The highlight of Chuckanut course has got to be the ridge trail, I stole a few side glances at the awesome views down into the ocean and skipped along the undulating trail. I was totally alone at this stage - I had lost Topher and Scott ahead of me and I wanted to catch them, if for no other reason that I didn't want Darcy or Jenn to catch me from behind.
The main final climb is Chinscraper, famed for being a gruelling climb. To be honest, I think it's not as bad as it's made out to be - at the worse it is a 15 to 20 min powerhike interspersed with running on the flatter sections, and I didn't feel bad hiking quite a bit as some sections are so steep that trying to run them would gain little time for a lot of effort. Up, up, up, a quick smile for Glenn who always takes photos on this section and soon the uphill grind was over - yay! Before starting up Chinscraper someone had said that I was 24th overall, but I was more concerned that I had no idea how close or far back the other women were so I knew I now just had to push the downhills and the flat interurban to the finish in case they were close. I powered down the fire road and love this section; wide, non-technical and down, down, down, getting time in the bag. So I rolled out at the aid station before the final 10km along the interurban and could once again see Topher and Scott just ahead. A quick pit-stop for some coke and I was off. My garmin read 3h29min - ok, 50mins to get the CR and I'd run 44min on this section on the way out. I passed Topher and Scott who encouraged me along and on the long straight section ahead I could see several guys spaced at intervals of about 100m apart ahead of me; moving targets and I was going to get them! This is when my garmin came in useful, I could glance down and see I was clocking about 4m10s per km, good enough to get CR but I couldn't slack too much. However it was also painful to feel how slow some of the kms were going as I literally counted them down one by one. Of course the CR was pulling me to the finish line but also the fact that I had no idea where the other women were behind me pushed me along too, I didn't want to get passed so close to the finish when I might run out of trail. But I was safe as I pulled back into Fairhaven Park and enjoyed the hundred metres or so of downhill tarmac to the finish line - 4:12:22! Female CR! 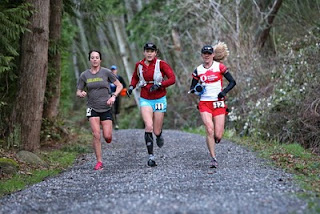 Jenn Shelton, Darcy Africa and I heading out on the Interurban. Photo: Glenn Tachiyama
All in all, a better race than last year. I was 7 minutes faster and ran a smarter race as went out faster so had enough left at the end but not too much. It might also we worth noting that by running 7 minutes faster I moved up only one place in finishing positions from last year (16th overall from 17th overall) despite the general consensus that that course was a little muddier and therefore slower this year. Geoff Roes knocked 7mins off the mens CR and there seems no end to this race getting more competitive by the year. Bring on Chuckanut 2012! 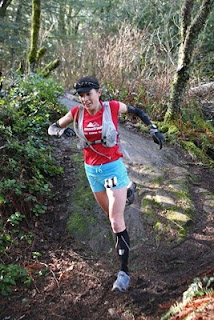 Posted by Ellie Greenwood at 7:31 PM