Until this past weekend the only big city marathon I had run was Boston (back in 2008).  I have run a few decent sized marathons and enjoyed the hype of Boston but have felt no real urge to start ticking any more of the 'big 5' off my list.  But with the Olympic year rolling round in London and now living permanently over in Canada this seemed as good a year as any to tick London off the list during a family visit, and it's always nice to do a road marathon once in a while to see where you are at as times between different courses are so much more comparable to each other than trail ultras.

London certainly lived up to it's reputation.  37, 000+ runners many of whom are first time marathoners raising money for good causes, and as if running a marathon for the first time is not enough many runners decide to wear a costume causing multiple world records to fall (5hr marathon whilst hula-hooping anyone?  Or how about the fastest marathoning vegetable - or carrot - to be precise).  This along with the buzz of elite racers (past Olympics champions, countless Kenyans, and several Brits battling it out for the final London 2012 slots) made for a great day.  And that's without even mentioning the great crowds of Londoners who come out to cheer everyone along the full 26.2 miles from Greenwich to the Mall, by Buckingham Palace.  If nothing else it's a great pedestrian tour of the sights of London (Tower Bridge, Canary Wharf, Cutty Sark and more).

Being as I really am in ultra training I had no rights to expect a great marathon time.  Sure, I am training hard but marathon specific work outs are lacking - speed sessions in particular.  But, of course us runners are always a little greedy in looking to improve and I figured that as my current marathon PB of 2:47:14 was set last year when I had also not specifically trained for the 26.2 distance then why not shoot for another PB!  So with that, my super friends Nicky and Mike dropped me off at the race start (the gun would go off at 9.45am) and I had two pace bands (one miles, one mms) strapped to my wrist - 2h45 target - yikes, that'll be 3:54 per km or 6:17 per mile.  I hoped that I would soon find that faster rhythm than I am used to and that the crowds would buoy me along. 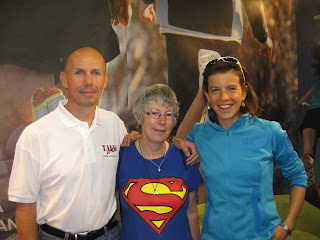 With Ian Corless and Pam Storey at the expo.  Got to love finding 2 ultra runners within 15mins of getting to a marathon expo :)


It was great to see a fellow Brit, Phil Dickens, who I know from my Vancouver running club zip past me at the start.  It made me think of Coach Hill at VFAC and helped me reign in my first few kms which were a little excitedly fast.  After that, there's not much to say.  I mean a marathon zips by pretty fast for an ultra runner and with big mile arches overhead and my garmin beeping every km I stayed focused on checking my pace til the half way mark, taking on fuel, soaking up some of the atmosphere and looking out for friends and family who had come out to cheer.  I trotted through half way in 1:22:22 - pretty much bang on pace for 2:45:00!  I felt good and with 'only' 21km to go picked up the pace a little.  Not crazy, but enough that I knew I was eating into my time even more and whilst not killing my legs so allowing a little buffer in case I fell off pace towards the end.

Soon I began to pass women and got feedback that I was 7th and then 5th female (in the non-elite field).  This was great as I had had no idea previously as so many men were ahead that it was hard to see how many women had gone out hard at the start.  Now the focus was when should I pick up the pace a little more or simply targeting one woman and then the next.  I never felt like I was running exhausted but my legs couldn't really go any faster either.

The final mile or two were tough (as they always are) but not awful tough.  Again, if only I'd done some speed training maybe I could have got my legs turning over fast enough to make it feel awful tough! 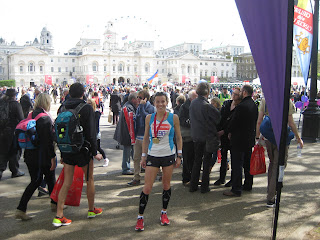 Tourist pic at the finish 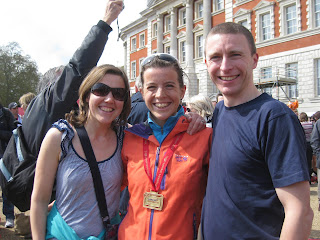 With my sister and brother in law

With 600m to go the metres were being counted down with big banners arching over the road and I ran as hard as I could and was glad to reel in one final woman with only 250m to go.  Soon I was on the famed finishing stretch down The Mall and over the line in 2nd place (non-elite females), knocking 4mins off my PB for 2:43:05.

Super happy, lots of fun, and a chance to put my marathon lessons to test again in 14 days time at BMO Vancouver.


Dave the Telephone gunning it to the finish line 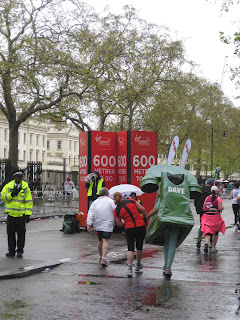 Posted by Ellie Greenwood at 11:42 PM