First day of the ski season! 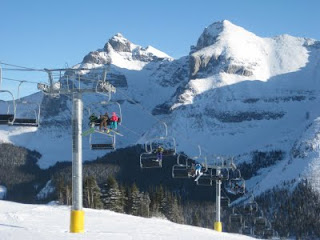 I can't believe that I have been in Banff for almost 4 weeks and yet until this morning I was still to hit the slopes!! I'm not the biggest of skiers but I do love it and definitely having lived here for a month it was long overdue that I got my skis on. Unfortunately I'd made my plans before the checking the weather and decided to go regardless; it ended up being one very cool day! I decided to hit Sunshine, even though I prefer Lake Louise I didn't fancy the extra travel time. Eager as I was to get back on my skis I got the first shuttle bus and was on my first run by 0930. Unfortunately the sun had yet to hit and warm anything up at all so the day started at minus 20 before wind chill - yikes! I was bundled up with as many layers as possible but I just feel the cold and kept having to make a dash to the chalet to defrost before hitting another run. The only thing that kept me going was the awesome snow - it hasn't snowed much in the last few days but the base is fantatsic and fab for some fast, groomed runs. It never did end up getting much warmer (and if it did, then the wind picked up and cancelled it out!) so I didn't stay up as long as I planned. Oh well, I'm just hoping it's warmer next Sunday when I am skiing with 25 British travel agents at Lake Louise! Another bonus was I ended up hitting the gym and getting a decent cardio workout in there :) The photo is one of about 2 I took, as it was too cold to get my camera out and gloves off! - but you can see that it was a stellar Alberta winter day - blue, blue skies, not a cloud to be seen and freakin' freezin!
Posted by Ellie Greenwood at 8:27 PM