Pitch Black, Minus 27, Going for a Run. Dedicated or Insane?

So it was a little cold today; minus 30 for my walk into work, but during the heat of the day things had warmed up and so when it came to my evening run it was a mere minus 27. I was going to go run and it never really crossed my mind not to. I mean there is a perfectly good gym up the road that I could have gone to, I could have taken a day off or I could have gone to yoga class instead, but I never really considered any of these alternatives as I'd had it in my mind that I was going for a run, so that was what I was going to do. I got out of work a little late, had a few things to do and then before I knew it I was heading out for my run not only in minus 27 but also in the pitch dark; one of the blessings of Banff being there are few lit streets but this also proves a challenge for night running.

So I knew I'd have to put a fair amount of gear on and in the end I got it pretty perfect (or maybe the body is just pretty amazing at regulating itself). I headed out in:

It was at this point that I realised that any Albertan who claims that they run in shorts year run is plain LYING!

I looked like a cross between an obese yeti and a bank robber, and all of a sudden I was very glad it was dark! Most importantly I popped on my new Black Diamond head torch which I was keen to try out.

Very soon my fingers were freezing, I momentarily contemplated going back for heavier mitts but instead opted for scrunching my hands up into tight fists and soon the blood was pumping back into my finger tips with that awesome melting feeling :) I adjusted my neck tube so it covered my ears and my chin and soon only my eyes, nose and mouth were poking out. As I turned off the highway and onto the unlit road up Tunnel Mountain I felt good but realised that even if I was going to struggle there was no way I could stop on this hill - I would just get too cold if I stopped for even so much as a millisecond. Soon my lungs adjusted to breathing in the cold air and I was feeling pretty good. Only one vehicle passed me, the town shuttle bus, and god only knows what 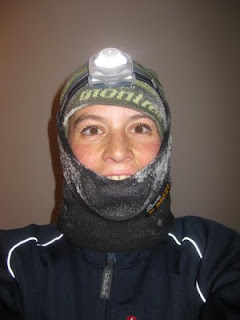 the driver thought seeing a bundled up runner slogging it up a totally unlit road on a pretty chilly night, fortunately he didn't stop to ask as I'm not sure what I would have said! I that is when I realised that if anyone saw me who was not a runner they would definitely class me as insane, but for anyone who runs we all know that when we have to get a run in, we just do - we don't think about the logic or the sense of it, we just lace up our shoes and get on with it.

I will admit I didn't add on the extra portion to this route that I sometimes do, but even so it was 48mins from door to door which felt great. And maybe runners aren't insane but just have very short term memories, because within five minutes of being back home I was telling myself that I really should have added on that extra 15mins to my run!

So am I dedicated or am I insane? I'd go with neither and just say I'm a bloody minded runner who won't let anything get in the way of me and my run!
Posted by Ellie Greenwood at 6:47 PM