Back on Track with a track-style 50k! 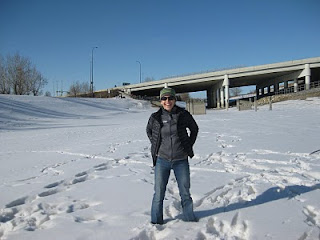 After my little 'going off course hiccup' at Orca's last weekend I was glad to have another race coming up this weekend to get 2010 off to a better start. Yesterday it was the Frozen Ass 50km in Calgary, a pretty low key event that I was looking forward to to see some Vancouver buddies again and also get my first Alberta ultra checked off. I knew that the course was flat but didn't check out the specifics too much until a few days before the race when I found out it was 25km out, turn around and 25km back on a pretty straight cycle path that runs down the side of a canal. Montrail team mate Ryne Melcher confirmed on race morning that the course had 20ft of elevation change tops and I seriously think that could be right - this was going to be a road style ultra! Ryne also panicked me a bit when he told me that there was zero flagging on the course but as soon as we were en route I realised why - there were a few curves, a couple of road and bridge crossings but other than that it was run 25km straight to your drop bag, turn around and repeat. Ok, I think even with my sense of direction I could cope with that :)

Race morning was relatively warm as it has been so far this year and the temperature hovered around a few degrees above zero for the duration of the race. A couple of wind exposed sections were a little chilly but it was a 'no-tocque day' which is awesome by my standards! Certainly better than the minus 29 temperatures that I had heard of from the year prior. I went out at a good pace, trailing behind Ryne who went off in his usual bullet style fashion but in the lead train of runners. Pretty soon the straightforwadness of the route hit and I wished I had brought my iPod as we spread out and I found myself running about 100m behind the nearest runner. But with two aid stations on the out portion - at 8km and 18km - this was a great way to split up the course. I was amazed to see a few people out cheering along the course and it was nice to pass by some locals just out for their usual weekend run.

Ryne had predicted my finish time to be 3:45 which I thought was pretty optimistic but then I also know he can be scarily good at predicting my finish times so when I got to the turn around aid station, quickly downed some coke and left I checked my watch - 1:53 - pretty spot on for 3:45 if I could keep up the pace. The run back to the start/ finish was definitely easier psychologically - I now knew the course and I was on the home straight. Soon after the turn around I saw my friend Mike heading in the other direction, probably only 5 mins or so behind me. Given he is injured I was glad to see that he was still running at a good pace but I could see from his expression that he wasn't exactly having fun!

It was great to pass runners still heading to the turn around and get a boost from the other runners. As I started to approach the final 10km or so I caught and passed the guy in front. was feeling like I wasn't running well and was really focusing on my posture but clearly I was still running well if I was gaining on the runners ahead. Then just coming into the final aid station - 8kms to go - I caught another runner as we had to wait a few moments for a train to pass before we could cross over the tracks. We exchanged a few words but by this stage I was just gunning to get done as my hips, glutes and hamstrings as usual were starting to seize. I just wanted to get to the finish. I pulled ahead of the guy and now had the extra motivation to keep me going to the finish - I didn't want him to over take me!

The course was probably 50% snow covered and 50% bare tarmac cycle path but the last few kms were pretty much snow covered and about 1/2 of the last 200 metres was slushy deep snow - not exactly conducive to a stylish sprint finish! So I stumbled into the finish - 3:48 - 4th place overall, 1st woman, a 50km PB for me and CR by about 38mins :) I'd been chasing Ryne's red Montrail shirt for the last 8kms but there was no catching him, even with pneumonia he'd placed 3rd overall in 3:46. Mike ploughed in around 4:30 and promptly used the surrounding snow to ice his legs - an awesome effort given his injuries.

Overall the Frozen Ass is an awesome race. With a limit of just over 100 runners it is a low key affair but Gord of Gord's Runnng Store does an awesome job at putting together the event. For just $40 we all got a race hoodie, a race bag with water bottle, energy bars etc and after the race there was plenty of food even until the last finisher came in. And a really nice touch was a race photographer who had a photo of each competitor printed up to take home by the time we got to the finish line (well I guess it's a nice touch if you're looking good in the photo!).

I raced for the first time in my Montrail Rockridge's and loved them! I'd had a pair of old Montrail Streaks in my drop bag at the turn around just in case I needed them but never gave them a 2nd thought. For a race like the Frozen Ass with a mix of road and snow (or trail) I can't think of a better shoe than the Rockridges. I just love them - and they come in very cool purple :)
Posted by Ellie Greenwood at 3:06 PM