A New Year, Some New Shoes! 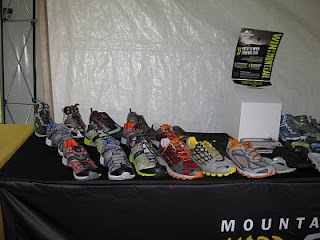 There is nothing that makes me happier than getting a new pair of trail shoes! I mean after a few runs trail shoes soon become muddy, beat up and lose their shine so the novelty of having a brightly coloured, pristine looking pair of shoes that hold the promise of so many fun times ahead on the trails is just something else. And with the new Montrail line up for 2010 now hitting the shelves I know there are some awesome shoes out there all waiting to be laced up and hit the trails!


Of course the award wining Masochist is here to stay. Having won 'Gear of the Year' award from Outside magazine last year this shoe is an awesome all rounder and if you are thinking of getting a pair it might be best not to think for too long; I know in North Van for sure the Masochists were like gold dust in 2009, selling out in many of the stores who struggled to keep stocks coming in. I can highly recommend the Masochist (and check out my posting from Nov 17, 2009 where I reviewed them).
New in the Montrail line up for 2010 is the Rockridge. When I first got these shoes and popped them on I was yet to be convinced until I took then for a run. The Rockridge definitely have a rommier toebox than the Masochists which creates a feeling of more space for the foot. I was concerned this might make the overall fit of the shoe feel a little loose but with a snug grip at the heel this wasn't a problem at all. The Rockridge would also be an ideal shoe for those just transitioning from road shoes as the fit felt more like some road shoes so would ease the transition. That said, I wouldn't class this as a shoe just for new trail runners - it is a great versatile shoe that I would feel comfortable running on pretty much any surface in. Tonight I covered snow, tarmac, ice and even that crunchy gravely snow/ ice mix that accummulates at the road side and felt like I had good traction on them all! Due to the lightness of the shoe and the breathability of the mesh on the toebox I might be slightly hesitant on wearing the Rockridge on very wet runs but other than that it is an awesome shoe that I will be wearing a lot, especially on my runs which incorporate both road and trail. 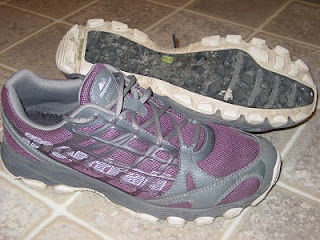 Check out the Rockridge, Masochist and the other Montrail 2010 shoes at http://www.montrail.com/ where you wil also see what sparkly colours they come in, just waiting to get splashed with some dirt!
Posted by Ellie Greenwood at 8:55 PM