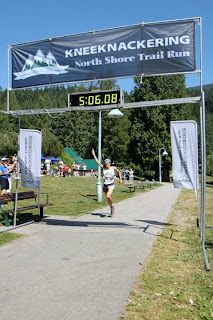 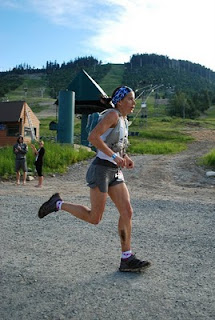 So, I managed to snag 5th place overall, 1st place female and a CR by 12m48s. In charging for that CR at the end I also manged to run the fastest time of the day on the final leg. On the 1st 1/4 I gained 1min on my 2009 time, on the 2nd I gained a further 5 1/2mins, on the 3rd leg I was picking it up and ran 9 mins faster than in 2009. But on the 4th and final leg I had smoke coming out of my Montrail Rockridges and ran 14m29s faster than in 2009! Nothing like a good bit of running scared to get those legs a'movin!
By the finish it had got to be a pretty toasty day so ideal for hanging out at Deep Cove, soaking the legs in the tepid ocean and catching up with lots of friends and fellow runners. Definitely for the slower runners it would have been a tough day out there as the cloud cover lifted and the heat really hit come midday. But there were only a few runners that dropped or didn't make the cut off, everyone else was clearly powered along by the thought of Kelsy waiting to present them with their medal at the finish line, and the thought of Honey's donuts at the finish line aid station :) It is amazing that of just over 200 starters, 120 were first time KKs, and I would guess many of them, first time ultra runners. It is a credit to the immaculate organisation of Kneknacker that so many runners are prepared to pit themselves up against some of North America's knarliest trails.
Full race details are at http://www.kneeknacker.com/
and race results are at http://www.raceheadquarters.com/
Side note: I should concede that although I can say that I finished 17secs behind Gary Robbins, in all fairness he had placed 6th at Western States 100miler just 14 days previously. But at least I made him sweat a bit.
Posted by Ellie Greenwood at 4:26 PM 13 comments: