The Loppet & the Lynx

I did it! I made it all the way from the frozen shores of Lake Louise to the frozen river of the Bow River in Banff on skinny french fry skis. All 71km of snowy beautifulness of track set cross country ski trails with some more choppy and rough stuff too. It might have been net downhill but there were a few uphills to get me seriouslyworking and I am just delighted to have made the cut offs and made the journey along the trails in beautiful Banff National Park.
I signed up for the Lake Louise to Banff loppet a little over a month ago and until then I had not had cross country skis on for about 5 or 6 years. But in the past month I got out skiing five times and tried to work on my technique a little, become more comfortable on skis and prepare some much underused muscles for the challenge. I was definitely not racing it but loved the concept of this point to point event.

Dipping to the Finish Line on the Bow River!
It certainly gave me a new appreciation of runners who are at the back of the pack and are often chasing cut off times. I got into the first aid station at 22km in 2hrs even, 30mins ahead of the cut off so this was looking good but I knew I wouldn't be able to dilly-dally too much, so decided that I would not stop at all apart from at the aid stations for a brief few minutes. My only mild panic was when a fellow skier asked if she thought we would make the cut offs. This was at about 25km to go and I was now worried - I thought we were on for about 7 to 7h30m finish and knew the cut offs would allow for an 8+hr finish but what if we didn't make it? This also coincided with a decent climb and hair raising descent so I pushed hard for a good 45mins until I came into the next aid station. 'How much further to the cut off' I yelped. 'Do you think I will make it in time?' The volunteer looked at me a little bemused, 'You're at the cut off. You've got 50 minutes to spare'. I was so delighted! I was having such a fun day and by this point knew I was going to make it to Banff so the last thing I wanted was to be pulled from the race not for not being able to do it but for being too slow. From there on Shona and I skied much of the final kms together which was awesome to make sure I kept my pace up and also to just have company along the trail.
Earlier on in the day I had ended up on my own much of the time. To be honest, this was fine by me. The aid stations were often enough to offer up a little conversation and encouragement and I found that if a got skiing with someone then either I would be getting caught up behind them and slowed or I would feel pressure if they were behind me. So it was at one of these solo times that I was nicely skiing along by the train tracks. It was about 11am and beautifully sunny on the fresh snow. I spotted a skier up ahead who was stopped to pull something out of his pack, and then as I looked on ahead I saw a good sized cat come out of the forest on one side of the trail. I stopped dead and just watched as this sleek lynx ambled over the ski trail about 30m ahead of me and about 20m behind the guy who was still pulling thing out of his pack oblivious to the cat behind him! But the lynx was pretty chilled too, no doubt aware of both myself and the other skier but totally unconcerned as he stepped over the trail, through the snow, over the train tracks and into the forest on the other side. It is one of those times on the trail that I will never forget, whether on skis or in running shoes part of the attraction has got to be witnessing nature and our awesome environment, and it was certainly one of those moments when I am clearly reminded that I am in living in the little bit of paradise that is the Canadian Rockies.
Skiers (inc 1st place Liza!) and Brenda - volunteer-extraordinaire! 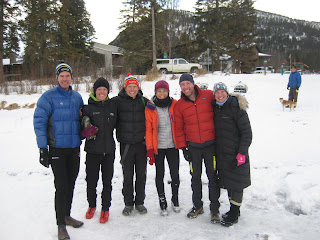 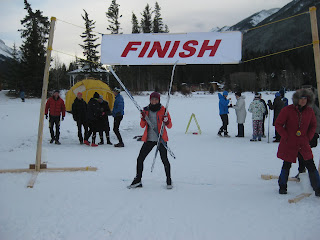 7h36m for 71km (yes, I could have run it faster, but that's not the point)
Thanks to all the volunteers who hung around for my 2nd to last place finish (and my friends too - even if they'd had time to go eat first!)
Happy trails and happy exploring
x
Posted by Ellie Greenwood at 4:02 PM 9 comments:

There has been lots of talk abotu the good, the bad and the ugly of prize money in ultras. Some are totally against it, some think it's the best thing ever that could truly make our sport professional. Ok, the new Steamboat 100miler (based around existing Run Rabiit Run 50) on Sept 14th in Steamboat Soprings, CO hasn't quite got $100, 000 in prize money yet but that is the vision of the race organisers and their well on their way.

So if you like to watch the best of the best duke it out for a whole bunch of $$$ then it looks like Steamboat will be the place to be, and even better - go run it yourself and be part fo the action!

More details on a recent article at http://www.steamboattoday.com/news/2012/jan/19/ultramarathon-event-steamboat-gets-massive-extensi/

Happy (and profitable) trails to everyone xx
Posted by Ellie Greenwood at 10:56 AM No comments:

Ultra Runner of the Year :)

Wow, what a privelege to be announced this week at Female North American Ultra Runner of the Year by Ultrarunning Magazine (click here). To see my name listed along sides the likes of Ann Trason, Kami Semick and Nicki Kimball - all ladies who have inspired me since I took up ultra running - really is quite something.

Ultrarunnerpodcast interviewed me and you can listen to the podcast with myself and male UROY winner, Dave Mackey, just click here.

Well I always believe that it is better to look forward to the future rather than looking back to the past too much but everyone one else in the running blogging world seems to be reviewing their year so I figured I would too.
It's been a year of some amazing experiences and dreams come true. Lots of Montrails worn, Clif shots consumed, Drymax socks changed, and calves compressed by CEP (oh, should I give a shout out to my awesome sponsors that also include Sundog Eyewear, Udos Oil and Dion Snowshoes?!)
So click here to view my 2012 running album because I always believe that a picture can paint a thousand words.
Happy trails, and now onto 2012 and yet more running goals.
Posted by Ellie Greenwood at 3:47 PM 4 comments: