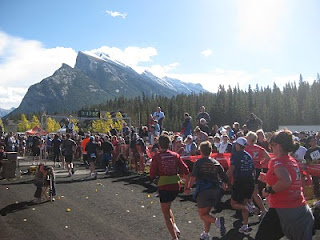 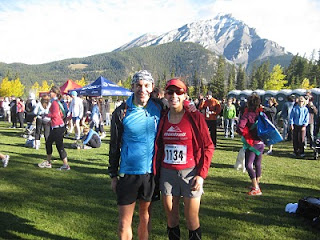 Well, ok - that might be a bit of an exageration but I have joined the ranks of runners with a GPS tracking my every move and after two runs with it I am very much in love with my new toy! Until now all my training has been done based on time goals rather than distance goals and even with my shiny new Garmin I think I am going to keep it that way. I found last winter when I first moved to Banff I decidely did NOT want to know how far I was running when I was adjusting to the altitude, slogging through snow and skirting slowly over ice patches. I was happy to come home knowing I had logged X many hours and that time on my feet and effort was more important than precise miles.

That said, it has been fun to already do two of my fairly regular training routes and find out how far I am running. Fortunately the distance has been a pleasant suprise, I half imagined I would think I was running further than I actually was but in fact it is the opposite :) I'm also looking forward to the element of I will now track my mileage with zero effort. At the start of the year I started a training log with all my workouts but that lasted all of a few weeks until I would forget to do it and then try to remember my workouts weeks later. With my Garmin all I have to do is put it on and then once in a while plug it into my computer and hey presto - lovely maps and stats of my runs!

Being a bit of a techno phobe I opted for the pretty basic model - Forerunner 110, and I have so far managed to use it with no problems which shows how user friendly it is. Ok, it might not have all the bells and whistles of some of the other models and it might 'only' have 8hrs battery life, but I will be honest here - I never log 8hr training runs so the battery life will be no problem! And for any races longer than 8hrs, well there are usually some mile markers along the way so I'm not going to obsess about splits.

So all in all, I think it's going to be lots of fun and I think that's as good a reason as any to use a GPS. Got to go, I'm off to analyse my splits and pace of todays run.....
Posted by Ellie Greenwood at 6:08 PM No comments:

The running link to this post is tenuous, but hey - it's for a good cause so please read on...

Pepsi Refresh Projects are set up sp not for profit organisations can nominate themselves for funds to support projects that benefit a community. Organisations set up their profile on the website and then anyone can vote for a project every day until voting closes (2 month cycles) and the project with the most votes wins the funding.

In the current cycle (just started so lots of time to vote daily until October 31st), First United in Vancouver is trying to win $25K of funding to support their storage facility for homeless people. This is such a simple but smart concept. How hard must it be for homeless people, they have so few possessions and yet those possessions must mean so much, but there are times that those possessions become a burden. How often when living in Vancouver did I see homeless people fiercely guarding their few bags or shopping cart of possessions? Yet their possessions barred them access to many things we take for granted. What to do with your shopping cart of life when you want to go take a shower at the community centre, or even buy something in a store? First United therefore has a storage box system where homeless people can check in their things knowing they are safe and giving them the freedom to go off and do what they need to do without carting around their things and giving them the automatic label of 'homeless'. Such a simple idea yet can have such an impact on homeless people's lives.

So you can vote every day. Click on the link, keep it in your favourites and vote every day til Oct 31st. http://www.refresheverything.ca/firstunitedchurch.

Also, if you are on facebook, do a search for 'Run Change' - in August the first 5km run/ walk for homeless people was held in Vancouver. I'd read about a similar project in US cities in Runner's World but this is the first I have heard of in Canada. Homeless people were invited to come out and participate in the 5km run/ walk in the False Creek area. I just love this concept, I mean as runners we all know that if we're having a bad day or feeling down, we can just pop on our shoes and go for a run - it's like a happy pill to many of us. That feeling of freedom and relaxation, the joy of the the pure and simple movement, of being able to chat and laugh with fellow runners and escape from the stresses of every day life, the sense of achievement of running distances we never thought possible. I can only imagine what stresses and hardships homeless people must face, and I can only hope that some of them will be able to experience the joys and self-confidence boosting feelings that running brings. And if I am going on a run I don't want to bring my wordly possessions with me, I want to drop them off somewhere safe..like the storage facility ar First United.