Hey Ladies! No cat fights! Let's all just bliss out on our spa products! 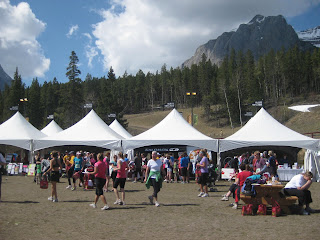 Today was my first ever women's only run. I found out about the Rocky Mountain Soap Company's 1/2 marathon through the Lululemon (yoga store) group that I have been running with every Thursday. It had already sold out but it's one of those events that let's you trade places at no charge and so I managed to get a spot via a Facebook trade.

Of course with training for my ultras I did no speed work in prep for today's race but was just excited to be participating in a local event (of which there are far fewer than in Vancouver) and looking forward to racing my first 1/2 in over 2 years! My 1/2 PB is 1:23:34 so I thought I could well beat that....oh how wrong could I be!
The race is held in Canmore (20 min drive from Banff) and I got there a good hour before the race to do package pick up, warm up and just scout out the area. The start/ finish was at the Canmore Nordic Centre (built for the '88 Olympics), already a little step above the valley with beautiful views of the mountains around. I had checked out the course profile and knew it was going to suck - pretty much out and back (that's all fine) but about 3km of downhill at the start...which would mean 3km of uphill at the end! And in between what had looked at brief glance to be a nice flat course was in fact a nice rolling course of small ups and downs at regular intervals.
In previous years there had only ben 6km and 12km events so I had no past results of the 1/2 to see (1) how tough/ easy the course would be and (2) what the competition would be like. Looking at the 12km times I figured I would be in the lead few.
Pre race I bumped into some ladies I know from Lululemon and also had the pleasure of meeting a local ultra runner, Brenda, who I've exchanged a few emails with but yet to get the chance to meet. Also to my suprise I knew one of the guys doing the race timing - Michael Campbell-Burns - a Lions Gate Road runner and a Vancouver trail runner - so great to see a familiar West Coast face :) I also got chatting to some fellow racers and it looked set to be a fun and social day.
Michael did the count down, the horn went off and away we were. Myself and another lady (Lynette) went out fast but within the first few hundred metres I was in the lead. I wanted to race hard so was not going to hold back and was very glad to have a lead cyclist as I didn't know the route at all. (Guys - I would highly recommend volunteering for lead bike in a ladies only race - Jay must have had a field day having several hundred excited, fit and lycra clad ladies trailing along behind him!). After a loop in the Nordic centre we hit the tarmac downhill to the valley/ town and I clocked 3:57 in the first km and 3 flat in the 2nd (Coach Hill, if you are reading this - I promise the 2nd km was fully downhill all the way!). Already it dawned on me that the last few kms were going to be killer! 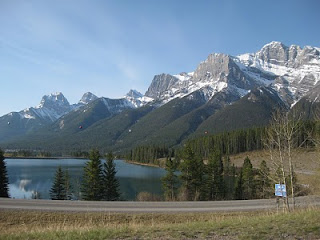 Now you may think that 21.1kms would be easy for me but as I'm a slow, steady runner my pace felt hard and I was thinking that Elk Beaver 100km 2 weeks prior was probably easier in some respects! I'm just not used to running where I am heaving for breath all the time. But I settled into a pace as much as I could and found that a bulk of the race was on packed cycle path trail - some of which was flat and other sections of which had switch backs to work it's way up and down. Jay (the lead cyclist and I were by now on 1st name terms!) was awesome at pre-empting me of the sections up ahead and I knew he was a runner when he was talking about what pace I was on for 1:26 he thought at the time. Now 1:26 I would be ok with, but under 1:24 would be much nicer ;) But by the 6km mark or so I realised this was not an easy, fast road 1/2 marathon...

I was well ahead of 2nd place, but like Jay said it was a beautiful day for a solo run! And I looked up at the surrounding snow covered mountain, blue blue sky, and dried out yellow grass and indeed it was a stellar day. I was just perfect in shorts and t-shirt and was happy with my choice to wear my Monrail Rockridges. No doubt road shoes would have been fine too as the trail sections were easy but on the other hand I would estimate about 40% of the course was non-tarmac. I was carrying Clif Shot Bloks and using the water stations en route, although I felt vaguely guilty when two kids aged about 6 got reprimanded for not being ready holding out water when the lead runner came though! No worries - they were pros by the time I passed their station on the way back :)
After the loop around to turn back I was pleased to hit a section of highway - slight downhill, good response from the tarmac and real open-road running. I then got to pass the ladies who were still heading out and it was great to encourage each other along. Another little boost in was given to my rapidly fading legs when I got a cheer from my coworker Lawrence who was out cheering on his wife and daughter.
I had hit 11km in 45 even and that felt fast! But I was totally thrown when I hit the 14km marker at 64mins - I mean I know I was hurting but yikes - 7km to go and I was at 1:04 and still had the uphill finish. Oh yikes, this was all going horribly wrong! Yet I then hit 15km at 1:08 - had I got back on track or.....no, as we were to find out later, I think the km markers were a little out! Whatever, I couldn't run harder so just plowed on and at least I wasn't getting caught.
The last few kms were as bad as I expected, I just simply had lead legs, was breathing hard and yet I think I saw an ant pass me. I was sooooo slooooow. I trudged up and had to hit a short power walk on one particularly nasty tarmac hill, but the upside is that after a silly-steep hill, normal hills were now manageable in comparison :) I could hear the announcer calling in 6km finishers and the sight was in finish. But no - we looped past the finish and down a hill, and as all runners know - what goes down must come up. Oh *&?!*. So uphill I went and to my dismay yet another seemingly unneccessary steep uphill had been added just before the fun rolling downhill to the finish. I swear that we looped 7 sides around an octogon to get to the finish line! And my killer winning time was a staggeringly slow....drum roll....1:36:11. Oh well - only about 12 to 14mins off my goal!
At the finish line we were handed a bag of Rocky Mountain Soap Company goodies (nice smelly stuff), there were towels to mop your face and some organic-gluten free-vegetable-fair trade-tree hugging juice was handed to us. We were definitely treated like ladies :) But it was at the finish line that the intrigue started to unfold. I had felt slightly better when one woman said she was 20mins slower than she normally runs a 1/2, and then the 23km or so rumours started. I mean you can't fool us ladies especially when some have GPSs!! So it does for sure seem like the course was about 2kms long.
I then saw Lynette who I had chatted to at the start and guessed she had come 2nd, well...yes, but.... It seems likely that the woman who crossed the finish line 2nd went off course so Lynette crossed 3rd but should have been 2nd and Sandy crossed 4th but should have been 3rd!! Now no one was being nasty about it but the 2nd finisher claimed she ran past both Sandy and Lynette. Sandy and Lynette admitted they were running hard but they were also running alone so figure they would have noticed someone race past them, they were not that delirious! 2nd across the line (for some reason we never found out her name!) claims that she recognises my ponytail from running behind me towards the start of the race. Well that's pretty good eyesight given she crossed the finish 12mins back of me! All in all Lynette and Sandy managed to laugh it off, and it got us chatting so now I may have some familair faces to spot when I race Calgary marathon in 2 weeks time. However it was judiciously decided by the RD that for the 1/2 marathon only age group prizes would be announced and we had a good laugh that they obviously expected some cat fight to break out if they attempted to award overall 1st, 2nd and 3rd!
Anyway, to top the day off before I needed to get the rental car back to Banff I decided to make the most of having wheels and continue my girly day with a power hike up as much of Lady McDonald as I had time for. A steep forest trail in Canmore, with the smell of pine needles and the chirping of crickets in the warm sun it got my blood pumping for some fun times discovering new trails this summer. And just had a few minutes on my fav terrain - boulders and scree- before I ran out of time and had to turn back. All in all, a fab day of new people, new trails and new freckles to mark the start of summer trail running season :) 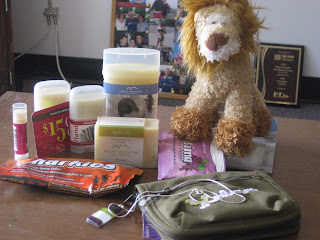 Posted by Ellie Greenwood at 5:29 PM