A few musings from a Half Marathon

Ok, ok, it's Wednesday evening and I ran the Pacific Road Runners First Half Half Marathon on Sunday morning, so in blogging terms this is old news - but hey, Monday was Family Day so I enjoyed a day away from the computer and then the past 2 days have been extra busy catching up on work after the day off!  So, a half marathon is not an ultra which makes a race report seem rather excessive to this mileage junkie who only raced 21.1km, but here are a few brief thoughts:

- My pacing was kinda bad.  I mean it wasn't awful, but heck - I had not much clue what sort of 21.1km shape I was in so I would surge with speedy optimism and then in the next km be reigned in by more sensible pacing thoughts.  I ran the first km in 3.33.  I was a little over excited :)

- About 2km in a guy running next to myself, Catrin Jones (eventual female winner) and Lisa Harvey said 'nice going girls, work together - that's good'.  Uh, thanks 'boy' - we were managing ok without your encouragement and I especially think that Lisa, a former Olympian, doesn't need advice on how to race :)

- When Kevin O'Connor shouted at me 'You're not going to let her go are you?' as Catherine Watkins was gliding past me, I decided he was right.  This made the second half of the race much more intense than the first, but Catherine's and Kevin's motivation were much needed and age graded Catherine Watkins is downright amazing.

- Ultra friends clearly love to cheer on half marathoners - it was fab to see Ferg Hawke, Adam Campbell, Ward Beemer and Pat Malavi, among others cheering us along.

- Pacific Road Runners do a FANTASTIC job at organising this race - a local run club that raises about $50, 000 each year for Variety and puts on a race that sells out in less than a day is impressive.  Thanks guys!

- I wore my Montrail Fluid Flex's.  It was most exciting to wear my beloved Montrails in a true road race - and man was I glad they only weighed 6.1oz - as I scraped a new PB by a mere 5 seconds.

- I ate a whole Yaletown Brewpub pizza after the race.  Clearly I am used to refuelling 'ultra style',  ooops.  I did run 43km the next day though so that should have burnt some of it off :)

Happy tarmac and happy trails to one and all.  6.5 weeks til Two Oceans 56km, best be off to the gym now tonight's Nancy Greene-threepeat (a slow one) is in the bag. 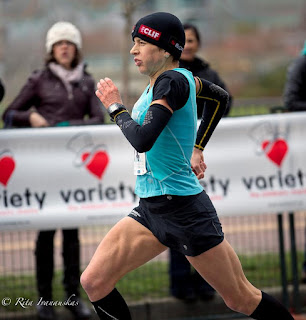 Posted by Ellie Greenwood at 7:14 PM