Where are my road shoes anyway? Edmonton Marathon Race Report

It was the usual sort of scenario that got me to the start line of the INTACT Edmonton Canadian Derby marathon this weekend. A friend sent me the link to the website, I figured it was a fast course and it was in my new home province so why not? Always fun to try a new race and winning Calgary marathon in May had got the road running bug back into my legs and mind. Of course, before August 22nd rolled around I had got myself in way too many trail races and instead of my initial thoughts of training specificially for a road marathon I once again found myself tapering down from ultra-trail mileage and quickly trying to get some turn over back into my legs in prep for the marathon.

Despite being in my home province, Edmonton is still a good 5hr drive from Banff but it was a fun road trip and Mike and I soon arrived at our accommodation for the weekend - Mrs. Cherniwchan is an 83yr old Ukranian lady and a close family friend of Mikes, and simply the best person to stay with for a race. We had food in our mouths practically before we were in the door and the beds were snug and warm with 100s of covers like no hotel bed ever can be.

Saturday afternoon was spent eating, relaxing, picking up race number and checking out the expo. The expo was small but I spotted a booth selling compression socks and calf sleeves. I'd been looking into getting some for a while and as my legs had been feeling pretty lead like after hoping back on the running band wagon pretty much right after Death Race I soon snapped up a pair of calf sleeves and figured I needed all the help I could get. For some reason the pre-race fuelling led us to West Edmonton Mall (largest shopping mall in the world. I hate shopping) and into the fun-fair area where Mike and I got our competitive mentalities honed on a few rounds of 'whack-a-mole'. I am sure that such a game can only be found in Alberta! Later in the day a friend of Mikes was kind enough to drive us around a good portion of the race course, which although I never think essential it was great during the race to have an idea of the course and landmarks ahead. Having not slept much the few nights prior I was in bed by 9.30pm, asleep by 9.35pm and the next thing I knew my alarm was blaring at 5.30am.

It was a short and worryingly bumpy 30min drive to race start where we could park within 100m of the race start/ finish at Northlands horse racing track. The reason for the bumpy ride become evident as we parked up and realised Mike's car had a flat, oh well - we had a race to run and car mechanics could be dealt with later!

The race venue at Northlands was awesome - tonnes of indoor space, lots of parking and well laid out. After a quick few hellos to some Vancouver friends who were also racing the full and the half, we made our way to the start line for the 7.30am start. A quick rendition of O Canada and we were off! I was confident to go out in the front of the pack as I was hoping I could scrape together a 2:55 or so finishing time despite the Death Race legs, and if I could post that time I figured I would be in top 10 to 15 runners overall. That said, I went out a little too strong and at the 1km mark posted 3:49 - oops, best calm down a little as I was meant to be on 4:08 kms! I reined in the pace a little and settled into a rythm and kept diligently checking my splits at each km. I was a little up but getting back on track and noted that Mike, who was out for a training race and aiming for 2:59, was on my shoulder. I yelled at him that we were 2mins up on my pace and this was only about the 5km mark, but I knew it would be easier for me to tell Mike to ease of his pace than for him to actually do that!

The course basically goes out and back to the start and then out in the other direction and back again, and pretty much remains pancake flat the whole way. On a map it looked simplistically dull but with the main route being along a pretty tree lined street, through shopping and well-to-do residentital areas it was suprisingly scenic. And of course the advantage of any such route is the steady stream of runners moving in the other direction to distract you when the going gets tough.

I passed throguh the 21km (and therefore almost 1/2 way) mark in 1:23:50 and had a little chuckle at myself. I have not run many half marathons so my PB is a not overly speedy 1:23:34, and now I was cruising along in a marathon only seconds off that. Although I realised this was a fast split I wasn't too concerned as I'd got 2mins ahead of pace in the very early kms and since then had held much closer to my intended 4:08 kms.

Because both of the turn arounds were loops it meant I couldn't see where 2nd place female was behind me so for all I knew she could be 20 seconds or 20 minutes back. This in a sense was good as it meant I never relaxed and never took my lead for granted, I just had to keep pushing in case I only had a small lead. Come the 30km mark I rather feared that my Death Race legs might get the better of me. I was tiring and thinking that maybe I had gone out too fast but I so didn't want to look stupid and post a slow finish to the race, so I dug deep and nestled in with a small pack of men and ploughed on. The 3 guys were chatting away as if they were out on a Sunday morning training run and I was rather glad that they didn't spark up too much of a conversation with me, as I was clearly breathing and working a lot harder than them!

I can vividly recall the last 8kms of Calgary marathon (in May) being tough, like really, really pushing-it-to-the-brink tough. But this time that toughness never really quite got me. I was pushing hard, I couldn't go any faster and I now just wanted to get this race done, but I was always in control and feeling mentally strong. At 36kms we hit the only hill of note in the race but with marathoners now in steady flow in the other direction they cheered me along and got me up the hill. By this stage I was churning out pretty solid 4:00kms and knew that if I could hold that pace that a sub 2:50 time was on the cards...just. I was blown away that I had come to this race really thinking my legs were toast and now a landmark PB might be happening.

For the final few kms I was urging on the next red km marker and toeing behind the lead-female bike. I had two bikes with me for good chunks of the race, both were ladies and it was great to have a little female company on the road :)

I pulled into Northlands, spotted the tower that I knew was near the finish line and powered in focusing on that. I was passing half marathoners and peeled into the finishing chute seeing 2:49:40 on the clock. There was no way I was letting that clock hit 2:50 before I was over the line so a final sprint push brought me over the finish line at 2:49:57 (or 2:49:54 chip time). Wow! I was stunned at my time and the fact that 2 TV cameras and 3 mikes started following me around until I could compose myself enough to spout out some incomprehensible-elated-excited-shocked-finish-line-ramblings.

Overall I am stoked with my result. The course is undoubtedly fast - very minimal elevation and not too many twists and turns. However I had not specifically marathon trained, my legs were not feeling chirpy pre-race, and although lower than Banff, Edmonton is still at 2200ft. I would totally recommend this race to anyone; the venue is awesome, the course scenic, the field large enough but not huge, the post race brunch tasty and the welcome from the elite director Brian Torrance superb. A few other things to note:

- Have you ever had blueberry perogies day before race day? Me neither, but they worked (thank you Mrs. Cherniwchen)
- Calf sleeves - I raced in them, they felt great, I'd wear them again. Hard to tell if they helped but I'd like to think they did.
-Congrats the Marilyn Arsenault, Katherine Moore, Mike Palichuk and all other sea dwelling Vancouver-ites who raced with less oxygen than they are used to. Nice work!
-A post race brunch of eggs, pancakes, fruit and coffee included in race entry and consumed sitting on real seats in a marquee is awesome for an event of this size!
- It takes a really long time to drive from Edmonton to Calgary at max 80kms/ hr on a spare tyre :) 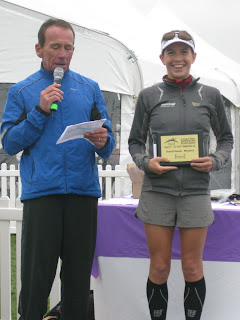 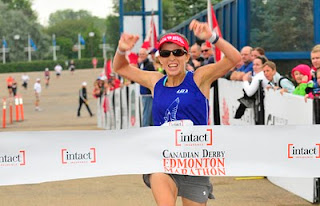 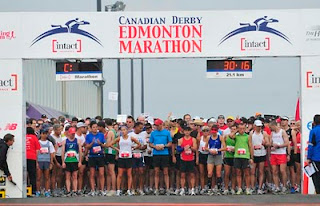 Posted by Ellie Greenwood at 4:27 PM