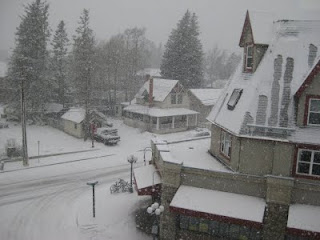 View from my desk in Banff, April 7th - day I left for American River

Ok, the race is actually called American River 50 miler but I had such a delightful 3 night stay in Sacramento for this fab race that it really needs to be renamed 'Awesome River'. My blog posts have been pretty infrequent recently as I've been laothed to post moaning-mini reports about trying to struggle through slushy yet deep snow, failing to find snow-free trails, and MORE fresh snow ... in April. So it was delight that I left Banff in the midst of a snowstorm on Thursday afternoon and about 7hrs (and a few airport sprints in my Montrail Rogue Racers) later I arrived in warm, palm-tree-blessed, sunny Sacramento. To make the journey even better by checked luggage arrived too (in Seattle, that had been in seriously in question).

Day prior to the race I transit-ed it out from my hostel in Sacramento (19th century manor in downtown, a 10-bed room to myself, could this get better?) to Fair Oks for package pick up. I chatted with a few runners, met the Montrail rep Justin and picked up some hot-pink compression socks for my plane ride home. I then headed back into the city and soaked up some sun whilst exploring the historic area as well at Capitol Park. All in all, it was a great day and I was back in the hostel cooking up some pasta by 6pm, and in bed by 9pm 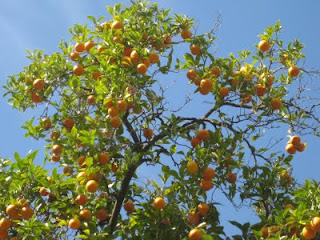 California oranges - now you don't get those in Banff National Park! 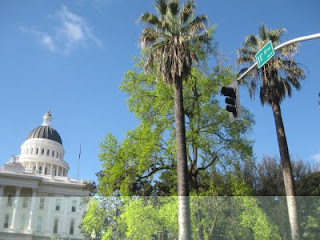 Sacramento State Capital and PALM trees!!!
My alarm went off at 4.10am after a night of tossing and turning. I hadn't slept well but felt rested and was relieved when the taxi I had booked actually showed up to take me to the race start. I was there pretty early but always like to have spare time for last minute prep and used the time to pick up some tips from volunteers who knew the course. I had checked out the desciption and the profile but it is always nice to get some specific tips, and I was glad to hear that the climb on the final 3 miles or so was really not as bad as it looked.
At 6am we were off, it was barely getting light so in was beautiful to run as the sun came up over a misty and cool morning. Kami Semik and I introduced ourselves to each other at the start, we had never raced before but of course knew that we were each others competition, I checked around as I'd expected to see Tracy Garneau but noted that she wasn't there. The first 27 miles of the course are pretty much straight, flat paved bike path. Kami and I ran side by side for the first section just chatting along. I noted that we were hitting averages of about 4:15/ km which was a little faster than I had planned but it felt ok and although I had been warned that it was easy to go out too fast on this course I decided to roll with it. It was great to chat to Kami but I am not always very talkative when racing and didn't want us to push too hard to soon, so I dropped back and tailed her a little, hoping I wasn't being annoying by hanging on her heels, but really not wanting to stay side by side. The weather was perfect at this point, cool and crisp yet sunny and we knew it would heat up. I was relishing running in just shorts and a t-shirt, having been able to leave the bulky layers back in Banff. A couple of times the path rolled a little or we dipped into the trail a little but Kami and I were still together. At the marathon mark (we think it was a little short) we rolled by at 3h05 which I was happy with. Shortly thereafter we came to a major aid station at the end of the paved path at Beals Point. I grabbed my drop bag, took some extra shot blocks for my pack and carried on through. I was trying to drink from the stations by stopping briefly so I had my 2l pack with Clif drink for in between - yet hoping I could avoid having to waste time filling that. I was mostly eating shot bloks and realised why I routinely stick to the these, as I tried a gel I got about 1/4 of the contents in my mouth and spent the next mile trying to get the rest off my hands, gloves and everywhere - nice!

Heading out of Beals Point I was glad to be done the tarmac, although it had been traffic free and scenic as it rolled right by the edge of the American River running on tarmac seems to pass so much more slowly. Although I had a relaxed and got into my run I was not feeling lost in my run and was concerned that I had maybe gone out too fast in trying to stay with Kami. As I looked ahead Kami seemed so much more relaxed than I felt. But now I could relax and enjoy it a bit, we had about 50km/ 30 miles in the bank and were hitting the trails where miles always pass so much faster and are more fun! 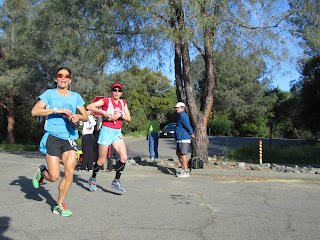 When I say Kami and I ran side by side, this is what I mean...Photo: Jesse @ Montrail

The trails were awesome! They rolled up and down but no incline was so steep it couldn't be run. If I powerhiked it was a for a very short stretch before I either got back some energy or peaked at the top of the hill to run down. As I bowled along I suddenly felt like I was easing ahead of Kami. Before I had been ahead of her or she ahead of me but we were always at the same pace. Now I could feel that without intentionally meaning to I was pulling a little ahead. I decided to use this and make a break. We had 30km to go, she may well still catch me but if I could get a lead now and maintain it, it could help if I tired later on.
The aid stations were excellent. By now, although I was energized, I was tired and so having aid stations every 5 miles or so I simply ran from one to the next. I would pause, get on board some coke and chips and energy drink, and carry on. If I ever I was tempted to stay long or hike a hill, I didn't dare - I had no clue how close, or far behind, Kami was. As I got into the last 20km and then 10km, I was working hard. My legs felt like they were seizing but I just kept pushing knowing that every step I took and the faster I took it, the closer I was getting to the finish line at Auburn. I'd been keeping an eye on my Garmin for pace and knew I was doing ok but I was also aware that I was bound to slow on the steep hill in the final 2 to 3 miles. At this point, the views were fantastic, I was passing a few men, and people were encouraging me at the aid stations but I really took little of this in. It was head down and push forward. I had to laugh as I had seen photos of this section of the course from when my friends Leslie and Keith had run it a few weeks prior, and although I was enjoying myself I could only think how much more they must have enjoyed it as a leisurely training run and having the opportunity to soak up the surroundings.
The final hill came, and not a moment too soon. I had been told that about 1/4mile was a hike and the rest was runnable, which was great info to have and pretty spot on, I even thought that the 1/4 mile was short! In the runnable section (now I'd hit tarmac again) I would walk a few steps only to force myself to run - get this done, and don't let Kami catch you! Scott Jaime was just in eyesight in his Pearl Izumi t-shirt ahead, I looked up and just focused on not losing ground on him. For the final 2 miles there were mile markers which seemed 2 miles part, but as I hit the final 1/2 mile I knew I was near the finish as I could hear the hubbub of the finish line. By now it was flat, so it was push to the line and - wow! 6:25:42. I was done. Kami came in 9 minutes later looking much more calm and collected. I soon realised why the last section had been so tough, being unused to heat I had not taken on enough salts and was seizing seriously. Without wanting to seem too much like a prima-dona I was escorted to the massage table by 3 men helping me with my gear etc. I knew I had to get electroltyes back on so before I got on the table I downed some coconut water. Felling a little better I now tried to get off my shoes and that was when all agony broke lose in my right calf - aaaaaaargh! Well, if I was going to cramp big time, having someone to hold me up and a massage therapist to work my calf was a good time to do it. Needless to say the massage wasn't pleasant but was definitely just what I needed (along with lots of salts and liquids). 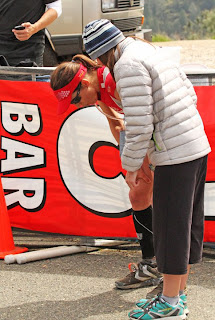 RD Julie ensuring there were no collapsed runners at the finish line! Photo: Bob@ Drymax

I am really happy with my time. It is good marker to see where I am at and I have never run a 50-miler this early in the year. It's great as a marker for Comrades and Western coming up, and a big lesson in running in warmer temperatures (because I am fully aware that it wasn't actually anything like hot!). It was also great experience to run side by side with a competitor for so many miles, great mental training and experience, as well as an absolute pleasure to share the experience with Kami.
So as I reward if you have read this far - for winning AR50 I received one awesome pair of Montrail trail shoes!! Fair to say I already have a few pairs so if anyone would like them just post a comment 'shoes please!'. If you make a comment without that, I'll assume you don't want them :) 'Shoes please!' comments must be posted by 6pm MT Friday 15th, and I'll then post who won them. They can be any current model, mens or ladies and any size - your pick! Pics will be added to this post shortly - but for now, I gotta go run (literally!) 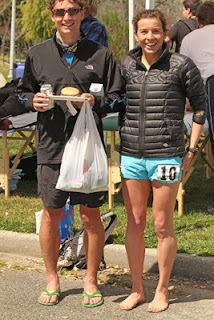 With fellow Brit/ N. American Ian Sharman (4th male). You can tell that Bob @ Drymax socks took this photo - our feet are in it perfectly, yet Ian has lost the tops of his head ;)
Posted by Ellie Greenwood at 4:39 PM