After a big-hype race like Western it is always fun to get out to a low-key local race and just enjoy some fun times on the trails with friends and the trail community. That was what Powderface 42 was all about for me today and lots of fun it was indeed! It was just over an hours drive from Banff in the foothills near Bragg Creek, Alberta so I hightailed it out of work on Friday and shared fun time around the campfire that evening with friends. I was totally not in race mode, my legs have been feeling pretty heavy after WS100 and as half of our camping group were not actaully running the race, it wasn't the most motivating atmpsphere for a race - it was just fun times with friends.
With the alarm going off at 6am I was still not in race mode and was wondering what on earth I had got myself into when I had eagerly accepted a spot at the race a few weeks earlier in a post-WS100 high. But of course by the time the shoes were on, a good cup of coffee down (thanks Nadja!) and then off to race start and chatting with fellow runners I was more in the mood to explore some new trails.
And wow - what beautiful trails! It was soon sunny and warm, not a cloud in the sky and the trails were thankfully varied and had great views. Mentally I knew that 42km would fly by (it wasn't even an ultra!) and when I had a little wobble in my positive attitude on the long steep slog around the 18km mark a fellow Brit, Carl Price, who I have met at a few other racersaappeared out of nowhere at just the right time for some friendly company and chit chat to distract from the hardwork. 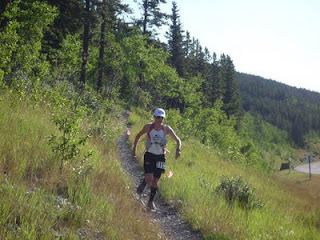 By 25km I had hit a groove (clearly an ultra runner if it takes this long to warm up!) and was enjoying the rolling terrain with the big climb well out of the way. I hiked the ups (still not much gas in the uphill legs) but I blasted the downs and cruised along the rolling flats. I also like to think I would have done Nicki and Brenda proud - two of my Alberta running buddies who I have never seen on the trail without a beaming smile of sheer delight and enjoyment on their faces. Fun, fun, trail times :)

But ok, I do admit I got a little competitive and when I saw my buddy Fitzy at an aid station with about 10km to go, I made sure I gave him a friendly elbow out of the way as I stormed up the hill (well, at leat until I was around the corner and could start powerhiking again!) The final 10km or so we passed half marathoners both on their way out and in (they had started 2hrs after the full) which was a great set up for us to all cheer each other on and motivate each other up the final few hills.


And strangely enough it was one of those races where I swear my legs feel better after the race than they did before! Some aches and pains are gone, and sure - they are a little tired, but I somehow feel looser and less lead-legged than I did at the start line. Yay! 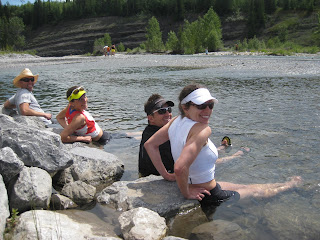 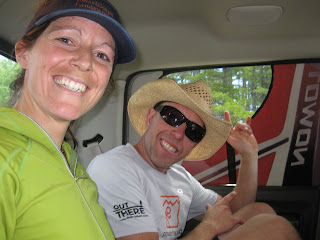 Sunny fun times on the trails for sure, and a big shout out to the Powderface organisers (Bruce, Doug & team) and vollies who were just excellent for such a relatively small local race, as well Out There store in Calgary, the main race sponsors who made sure everyone went home with a nice goody bag and Mountain Hardwear race shirt.

One final WS100 note: if you really want to hear more about my WS100 race then check out Running Stupid podcast with Ken Mical.

Posted by Ellie Greenwood at 7:48 PM