An awesome weekend of Running & Skiing 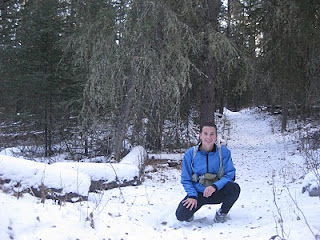 This week Banff got let out of the deep freeze and suddenly going outside seemed so much more appealing and fun! I also think my perspective on warm weather has changed - it was about minus 8 over the weekend and this seemed like super mild weather, whereas I would have probably been all bundled up in such temperatures a month ago! Anyway, on Saturday I got a decent trail run in and just loved the fact that I didn't have to be totally bundled up - I had less layers on, no gloves, no tocque, breathing was easier and I actually enjoyed the fresh air after a week in the office rather than feeling that I was just running to stave of hypothermia! I ran by Rundle Riverside which seems a little used trail, probably because it starts a few kilometres down a closed road at the far end of the Banff Springs golf course so takes a while to get to, but I kind of like that as it splits the run into stages. The only evidence of others on the trail were some pretty big prints in the snow - I'm guessing that they were either cougar or a decent sized wolf but I was happy enough as they didn't look too fresh! Though when I did first spot the tracks I decided it was best to switch of my iPod so I was a bit more in tune with my surroundings, just in case! The trail was in much better shape than when I last ran it - less ice and a nice thin layer of snow to get a grip on so it was pretty easy to get my 2 1/2 hr run in and I loved the gentle rolls up and down. Though I will admit by the end of it my hamstrings were feeling pretty shot, which is a reminder that I need to find a good massage therapist here to get the stiffness worked out! Yet another thing I miss about Vancouver is my regular massages which were killer painful but killer effective, courtesy of Bobby Crudo.

Sunday I decided I should make the most of the mild weather and headed up to Sunshine for a ski. Instead of getting on my downhill skis I decided to give tele skiing a go, which I've not done for about 3 years. I was wondering whether this was total craziness as I headed up on the first chair lift but I guess skiing is rather like biking - once you've got it you never forget. I did some easy cruising runs 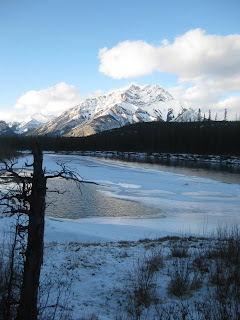 and was just loving it - mild temperatures, fresh light snow falling and some awesome tele turns! I had planned to head down early so I could get another daylight run in but was having too much fun so instead stayed on my skis until my quads were screaming for a break! I'm definitely going to get more tele'ing in this winter and it'll be good for strengthening for my quads for sure :) In fact today will probably prove to be pretty expensive, I had grabbed some Volkl rentals from a rental shop in town (http://www.snowtips-bactrax.com/ - they are awesome!) but now am at least going to do some window shopping for my own gear :)
So once I was back in town it was getting dark but was still determined to get a run in as I'd had so much fun on my run yesterday. As it was dark I did a little loop mostly in town but also threw in one lap of the Fenland loop - about 3kms on pitch dark trails - it was so picturesque with light snow reflecting in the beam of my headlamp and just a trace of snow on the ground. Perfect ending to one stellar weekend :)
Posted by Ellie Greenwood at 8:01 PM