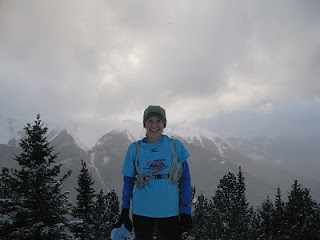 Happy New Year! Welcome to 2010 and for me I'm hoping to start my 2010 running path afresh again tomorrow after not the best of outings today! I had planned to get a decent run in today to make the most of the 3 day weekend but let's just say that I didn't have my normal energy today after a bit too much celebrating last night :) As ever I thought I would go out for a fairly quiet night so I am not quite sure where the night disappeared to but before I knew it we were closing the bar down after a bit too much red-wine fuelled dancing and it was 3am by the time I crawled into bed. I didn't feel too bad this morning but I felt none too lively either and of course I am used to getting up ay 0630am so kept waking up and ended up not having that much quality sleep. The thought of going for a run was not that appealing but I didn't want to bail on myself either and I know that I need to get serious training in for Orca's 50km which is now only a month away. I therefore decided rather than do a true run, I would run up to the base of the Sulphur mountain gondola, hike up to the top and then back down - it makes it more of a fun hike and then a blast down rather than steady running which I thought would be quite a challenge today!

Well the run to the base of the gondola was the worst, it is all runnable but I was just feeling hazy and tired from last night so ended up walking sections I knew I should be able to easily run. But I was determined to get this work out in and once I got onto the snowy switch backs going up Sulphur I tucked my head down and just got on with it. As I didn't start my run until 2pm the trail was quieter and I only passed a few other hikers on the way up. Just as I was starting to feel really quite good and maybe about 3/4 of the way up I turned a switch back to see a guy dressed all in black standing at the corner of the trail. He had a mad bushy beard and little round glasses and was reading a book. I then noticed his ball cap logo 'Jesus Saves You' - what?! So basically this guy was half way up a mountain reading a bible in sub zero temps. Each to their own I guess.....But I am beginning to think he is targetting me for salvation as the other week I was out running on a really quiet road and I see a car parked at the side with a masive sign in the dash - 'Jesus Saves You'! So if I see this guy another time I really will begin to think I have a religious zealot stalking me on my runs! Personally I think that running saves me and I have no need for anything else to save me, but maybe I should avoid the subject of religion....

So I carried on power hiking and by the time I got to the peak it was getting on to 4 o'clock so the light was beautiful especially as light snow had begun to fall. I found some suitably friendly looking Japanese tourists to take a quick snap of me to mark the New Year, they commented that I was very brave (I'm guessing they'd taken the $29 gondola!), I bundled on some extra layers and then started down on the slippy descent. As there was some pretty fresh snow on the trail I didn't get brilliant traction so couldn't go totally crazy on the way down as I kept having to screech to a halt to make the turns, but even so it was dead on one hour to get up and 23mins to get down. Not too bad for 5.6km (that'll be 14 laps of a track I figured when I was trying to break the climb into sections!) and 698m of elevation.

My biggest suprise was when I got home I saw that I had clocked 2h37mins which is almost exactly the same time as when I did this route in Nov. I'm just hoping that means that I've got fitter so should I do it again without the red wine influence then I would be a lot faster!

Anyway, tonight is definitely a quiet night in and some sleep catch up so I can run tomorrow and feel good whilst doing it.

Happy Running in 2010, I'm looking forward to one awesome year ahead :)
Posted by Ellie Greenwood at 4:30 PM